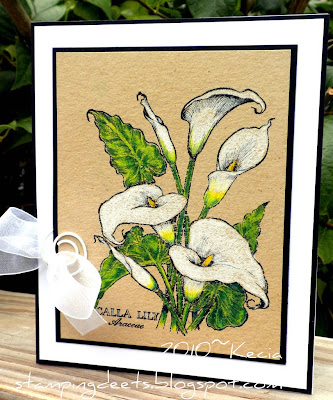 Once again I found myself in the mood to create a card. I have been eying this PSX calla lily stamp on my shelf, since there will be calla lilies for our upcoming wedding.

This card came together rather quickly, so rest assured, I'm still getting things done that need to be done. I stamped the PSX image onto kraft paper with Marvy dye black ink. I colored the image with my severely neglected Coloursoft pencils I treated myself to last Christmas. (I'm starting to like them more and more...my initial reaction wasn't so great.) I then sprayed the image with a workable fixative, and layered the image panel with white and black cardstock panels. A white circle clip and white sheer ribbon helped to put the finishing touches on this card.

This card meets the requirements for two SCS Dare to Get Dirty Challenges, DTGD10Edna15 and DTGD10gbedwright. 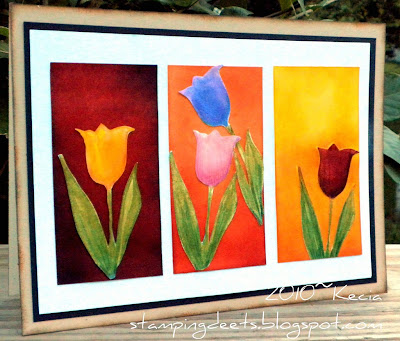 When I took a look at today's Inspiration Challenge #242 on SCS, I was immediately drawn to the bright, warm background colors of this Tulips Triptych seen on the Novica site. I thought through sponging and with a tulip image from Hero Arts, I could somewhat capture the beauty.

Like I said above, this creation was inspired by IC242, but also meets the requirements of some Dare to Get Dirty 2010 challenges, including DTGD10melmel and DTGD10kmahany.

Okay, now back to doing things I should be doing.
Posted by Kecia at 9:15 PM 1 comment: 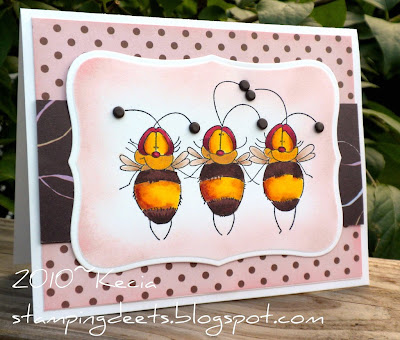 I'm trying to decide whether I'm on a card roll right now to avoid all the other stuff I should be doing in preparation for the wedding. Basically, I'm not very good with detailed wedding things, but I'm a decent cardmaker, so I'm guessing I'm making cards right now just to feel good about something. At any rate, right now stamping is a de-stressing strategy I have, so I'm just going to go with it.

The bee image is from Stamps Happen. I stamped it with Marvy dye black ink onto a Nestabilities panel cut from Georgia Pacific cardstock. I did some sponging around the panel with SeaShells Seashell Pink dye ink. The image is so fun to color, so I did some multimedia coloring with Copic Markers and colored pencils; including Prismacolor, Caran d'Ache, and Derwent Coloursoft pencils.

Patterned paper panels were used to create this card, as well as brown brads for the antennae.

This card was inspired by a Dare to Get Dirty Challenge on SCS, DTGD10flowergal36. 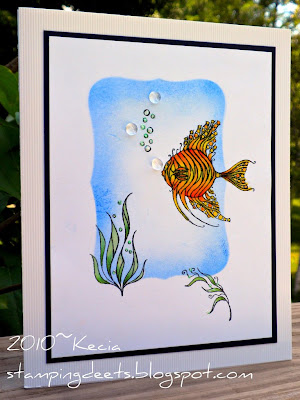 I stamped the fish, bubbles, and plants with Marvy dye ink onto Georgia Pacific paper. I colored these images with Copic markers. I then proceeded to color over these images with a Versamark pen and heat embossed with clear embossing powder to preserve the colored images. At this point, I sponged around a negative cut from Nestabilties die with Adirondack Stonewashed dye, Vivid Bermuda Blue dye, and Vivid Ultramarine dye inks. Then I highlighted the bubbles with Stickles and adhered three crystal beads to the card to form more bubbles. Black and white cardstock panels were used to complete the card.

This card is very similar to a card I made a couple months ago, found here.

This card uses a lot of white space, so it fits the SCS's Dare to Get Dirty 2010 challenge, from rsalamon.

As always, thanks so much for visiting. I love it when I make cards over consecutive days as I feel as if I'm in a creative zone. I want to stay in this zone for as long as I can. But, oh...I have so much to do in the real world. Uugh! 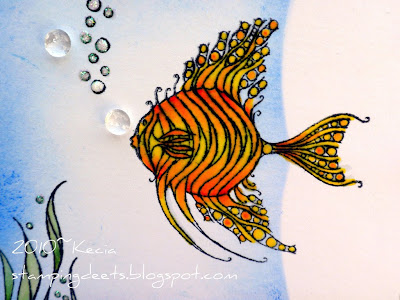 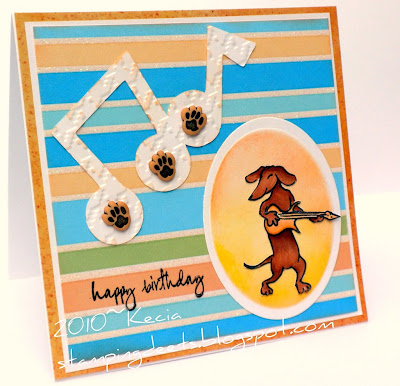 My dachshund, Sloopy, found herself in need of a birthday card for her best friend, the Gracie Dog. So, she asked me if I could help her out with this. I'm always happy to make a card for someone as long as they give me an advanced notice, and Sloopy always does. She's pretty on top of things, unlike me.

The dachshund image is from Cowtown Stamps. I stamped it with Marvy dye black ink onto Georgia Pacific cardstock. I colored it with Copic markers and then cut it out and placed it onto an embossed Nestabilities oval that I sponged using the following dye inks: SeaShells Conch Shell, SeaShells Peach Bellini, Distress Ink Mustard Seed, and Adirondack Sunset Orange.

The musical notes were cut using my Cricut and embossed with a Cuttlebug folder. Little dog paw embellishments were added to the notes. The sentiment is from Stampendous.

Patterned paper layers were also used to complete this card.

This card fits the SCS Dare to Get Dirty Challenge,DTGD10AmberDawn01, which was to get in touch with texture.

I hope the Gracie Dog likes her card. Sloopy seems to approve.
Posted by Kecia at 5:18 PM No comments: 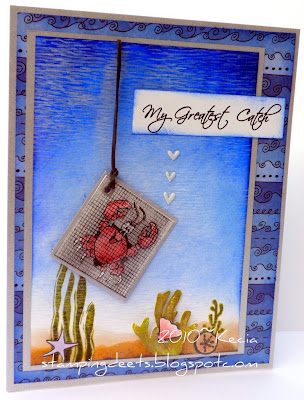 I'm getting rather excited because soon I'll be getting married to my "greatest catch". Thought I'd make him a card today, rather than do the 1000's of things I should be doing in preparation for the wedding.

The inspiration for the card came from SCS's "Dare to Get Dirty" challenge, DTGD10BevMom, which was to use a TV show as inspiration for a card. I thought of how much my fiancé and I like those Deadliest Catch marathons on the Discovery Channel, so I thought I'd use that particular series as my inspiration.

I made the pot first. I stamped the crab image from Stampin' Up with Marvy dye black ink onto Georgia Pacific cardstock, colored it with Copic markers and cut it out. I put it in between two small sheets of acetate that had been stamped with a background image from Judikins using Stazon. I adhered it to a metallic gray cardstock panel and used an eyelet and broken rubber band to complete the effect.

Heart-shaped raised stickers were used for bubbles, and the sentiment was computer-generated. The scene was placed onto metallic gray cardstock and patterned paper panels.

What a great challenge!
What an even greater catch! 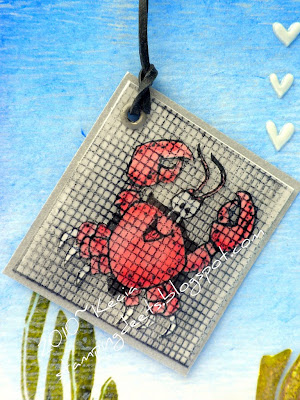 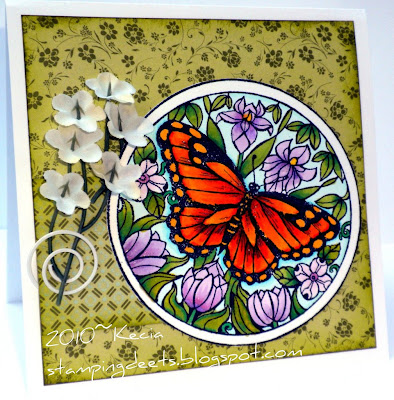 I found myself in need of a birthday card for my soon-to-be mother-in-law. I have learned that she likes butterflies, so I think this card may fit the bill.

I stamped this Northwoods image with Marvy dye black ink onto Neenah Solar Crest white cardstock. I colored the image with Copic markers and added a few glitter highlights with a Sakura glitter pen. Various patterned paper and white cardstock were used to complete this card, as well as a circle clip and some flower embellishments. Very lightly, I did some sponging around the cardstock panels with Adirondack Lettuce dye ink.

Thanks for visiting!
Posted by Kecia at 10:49 PM No comments: 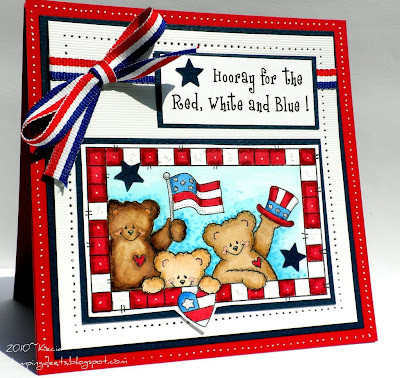 It has been way too long since I've created a card. Almost a month. How is that possible? Especially given that I am off for the summer. My guess is that it could be a wedding thing.

Anyway, I very much found myself needing to relax and color...so what better way than to make a card celebrating our country's independence. The image used is from Darcie. I stamped the image on Georgia Pacific cardstock with Marvy dye black ink and colored with Copic markers. I did a little highlighting with a Sakura glitter pen, though the photo does not show this. The sentiment is computer-generated and various red, white and blue cardstock were used to complete this card. I did some paper-piercing, some white gel pen dots, and used some patriotic ribbon to put the finishing touches on this card, along with the addition of a few paper-punched stars.

Happy Birthday, USA!
Posted by Kecia at 11:54 AM No comments: 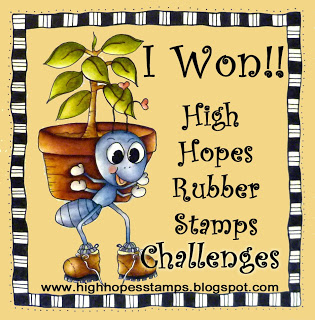